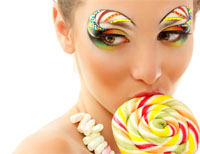 Sugar, sugar, sugar. Everybody is talking about this sweet stuff. You maybe already know that sugar is one of the main contributors to weight gain. The problem is that sugar is in everything these days. At least half of the sugar we consume comes from soft drinks, fruit drinks, and sports drinks. Do you actually know how much sugar you are consuming everyday? Start paying attention to the “hidden” sugars in food. Look at the labels. The ingredients are ordered by their amount so if some kind of sugar comes in first, second or third place, you can be sure there is a great deal of the white stuff in there. Everything ending with -ose is some kind of sugar. Hey, it may not even be white. It can be in different forms like high fructose corn syrup (beware), brown sugar, invert sugar, glucose syrup or fructose. All of them contributors of weight gain and the grave health problems that implies. Don’t be fooled by the tricks of the food industry. A label saying “No suger added” doesn’t mean a product doesn’t contain sugar. It can contain insane amounts of sugar from concentrated fruit juices. All sugar counts, even fruit sugar (fructose). Do you love to drink sodas, like drinking one can a day? Maybe it’s time to change that bad habit and save yourself the disservice of adding about 15 pounds to your body weight in one year?
An excess of 3500 calories is stored as 1 pound of fat. One soda a day per year makes 365 days x 140 calories = 51100 calories. 51100/3500=15 pounds added per year!

Some foods with “hidden” sugars are: 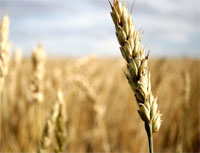 It is not as commonly known that grains, and especially refined wheat, is even more dangerous than sugar. Two slices of white bread is equal to 6 teaspoons of sugar! Wheat is really high in carbohydrates (carbs) and has a very high GI (glycemic index).

In the 60’s and 70’s scientists were sent out on a mission to solve the world starvation by developing an improved, gene modified version of wheat. They came up with a new type of wheat that increased the yield tenfold and everybody had wheat in abundance. Thumbs up! Hooray!

But it turned out they got more than they bargained for.

You cannot genetically modify something without side effects, and the new version that was supposed to still the third world hunger, was introduced in the west world as well. Little did they know about creating a monster high in gluten (blood sugar raiser and inflammation inducer) and starch (amylopectin A that is super fattening).

Wheat also contains a protein called Gliadin that is a appetite stimulator which is bad when you are trying to eat less and lose weight.

In short; wheat is really something you should look to avoid now that you have a weight loss goal. Try eating a minimum of bread, pasta, pastries, pizza, breaded and battered foods, sauces, ready to eat food and cereals to mention some. Wheat and other grains contains a protein called Gluten that may cause chronic inflammation and digestive problems, even if you’re not gluten intolerant. Unfortunately wheat is “hidden” in a wide range of foods. Foods that you wouldn’t bet on containing wheat in some form does actually have wheat added. Don’t think that bread that contain whole grain is a safe bet. Just because the label on the loaf says “Whole grain” it’s perfectly healthy (even if the food industry wants us to think that). Whole grain doesn’t contain much less calories and raises blood sugar quite as much as refined wheat. However eating 100% whole grain is an upgrade compared to munching toasted white bread every morning.

All carbohydrates end up as glucose so you can say that carbohydrates = sugar. In other words carbs gives you lot of energy and that may be good if you are running a Marathon, or participate in Iron Man Triathlon, but for you and me carbs gives an excess of energy that eventually turns into fat and should be avoided as much as much as possible. Carbs is however good for restoration after a intense work out as it’s needed for building of muscles so getting some “good carbohydrates” after training is okay. Hint: A double white toast sandwich with jam is not a good source of carbs (but a fruit and some freshly squeezed juice is). 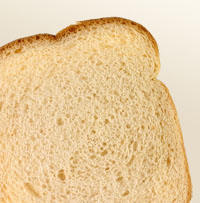 Carbohydrates raises the blood sugar level in the blood which raises the insulin level as well. Insulin has the function of controlling the blood sugar level by taking sugar from the blood to the cells. It also tells the fat cells to store excess glucose (sugar) as fat. With a diet rich in carbs, the insulin level is constantly elevated which makes the fat cells hold on to the fat. Insulin is preventing fatty acids to enter the blood stream by keeping them “locked up” in the fat cells. In other words carbs prevents the fat to be burned which is really bad as you and I are trying to lose body fat.

The carbohydrate intake should mainly come from fruit, vegetables, nuts, seeds and legumes. Cutting out carbs from gluten and starch rich foods like white rice, pasta, potatoes, bread, corn products, gluten containing cereals and such will make the body start to burn that nasty body fat instead of the excessive energy from the carbs. There are more benefits than weight loss with controlled intake of carbohydrates. Proven health improvements are: stable insulin levels, bad cholesterol goes down, good cholesterol goes up, controlled blood sugar, blood pressure and body fat levels. Eating a minimum of carbs can be very difficult if you’re used to eat lots of the foods mentioned above, but you should start to choose your carbs wisely. 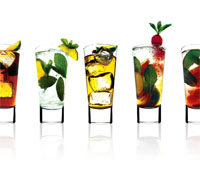 Cutting back on alcohol will be a very smart thing to do as it is very high in calories (double the calories in protein and carbs), has a very high glycemic index and the disadvantage of slowing down your metabolism by over 70%. If you eat and drink alcohol, it’s the alcohol in that drink the body burns first, postponing the burning of the energy in the food.

Ever been craving for a late night meal after a wet night out? Alcohol has appetite increasing attributes, and together with a fattening food like a burger meal or a pizza, you are sure to store some extra unwanted fat. Carbs and alcohol is a very bad combo. Drinks with drink mixers contains lots of sugar. The best choice for drinking is red wine, as it contains a good deal of nutritious anti oxidants.

Abstaining from alcohol is something a lot of people find very hard. You should anyway try to do your best to limit your consumption as much as possible, and choose the occasions when you get to “celebrate” with a drink, or a cold one. It’s up to you if you want to lose weight fast or not. Alcohol is going to make it a lot harder to drop pounds.

If you are going to a party all night, let’s have a low-calorie, no-carbs day and the best is if you can have a good, intense workout before to boost your energy burning mechanism and start your after burn effect (that will burn calories even on your hang over day :)